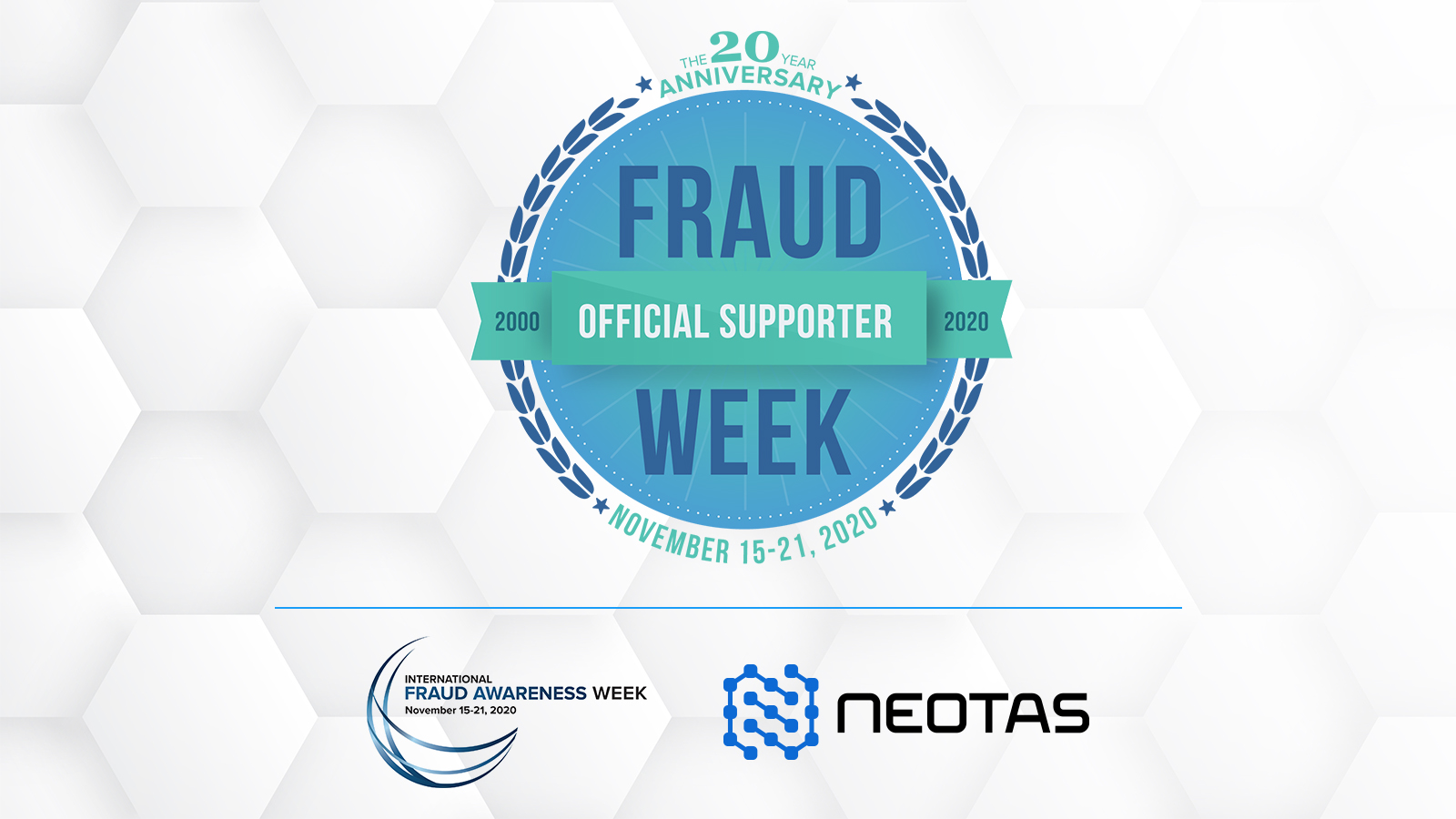 “Fraud and deceit are anxious for your money. Be informed and prudent”.

Neotas have joined the global effort to minimise the impact of fraud by being a supporter of International Fraud Awareness Week (IFAW). IFAW, or Fraud Week, is celebrating its 20th anniversary this year and is organised annually by the ACFE, the world’s largest anti-fraud organisation.

Throughout the week, supporting organisations and individuals share resources and engage in conversation online, in an effort to proactively fight fraud and help safeguard businesses from this growing problem.

In their 2020 Report to the Nations, the ACFE compiled data from 125 countries to help explore the costs, schemes, victims and perpetrators of fraud. Alarmingly, amongst their findings they discovered that companies lose an estimated 5% of their revenue annually due to fraud.

A recent BBC investigation also highlighted how fraudsters had hijacked the government’s Bounce Back loan scheme, resulting in potential taxpayer losses of up to £26bn through fraud, organised crime or default. The ACFE’s Report to the Nations (2020) found that just 12% of fraudsters are being caught and convicted. As a result, it’s important to identify robust, future proof tools for trying to safeguard businesses and individuals from the risk of fraud.

Alongside internal measures like employee training and procedure updates, effective background screening can play a crucial role, whether it’s pre or post employment, or as part of due diligence checks. This is where the power of OSINT comes in.

Search engines reveal just 4-6% of available data, while traditional background checks like DBS or credit checks are limited by their very nature, they only identify whether a subject appears on a set of specific databases. Our OSINT specialists are able to scour 100% of open source data in over 200 languages, leaving no stone unturned.

Using a combination of machine learning, AI and human analysts, Neotas are able to identify “red flags” for fraudulent behaviour within a matter of days – potentially saving individuals or organisations from the risks and harmful nature of fraud.

Through Enhanced Due Diligence, we recently uncovered a subject who had hidden a past conviction for fraud worth over $50m. Having changed their name and moved to the UK, they had escaped traditional customer due diligence but by supplementing these checks with OSINT, we found a network littered with criminal ties, bribery and corruption. Only through these insights were we able to help protect our client and their business.

Working alongside traditional checks, these enhanced methods guarantee to paint a full picture and lower the opportunity for fraudsters to take advantage. Get in touch with our experts if you would like to know more.

Our team of experts have continued to educate themselves on the latest anti-fraud measures, including taking part in seminars throughout the week and competing against each other with the Fraud Week trivia quiz.

Based on the results, responders overwhelmingly recognised the financial impact of fraud. The results were more varied when it came to identifying fraudulent behaviours and the ways to prevent them moving forward. What is clear is the need for the continued development of future-proof anti-fraud measures like training and robust, technology-driven background screening.

We’d like to say a big thanks to everyone who took part.

For more resources and more information on Fraud Week, you can head here.